Attention!
This article or section contains spoilers. Please read at your own risk.

Attention!
This article or section is a stub. You can help Kiznaiver Wiki by expanding it

Katrina Salisbury
Nico Niiyama (, Niiyama Niko?) is a main character and one of the group of seven kiznaivers in the titular anime, manga and novel series.

She resembles the sin of Greed. In modern Japan, her sin is 'The Eccentric Headcase' (Japanese: 不思議メンヘラ, Romanized: Fushigi Menhera, Official English Translation: "Screw Loose"). Her identification when she experiences pain is D-6. 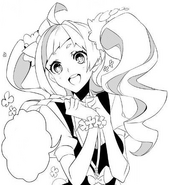 Nico in the manga

Nico appears to be a generally eccentric, animated, and childish girl. Her unique sense of style takes inspiration from Japanese Fairy Kei, and she seems to want desperately to stand out. She tends to overreact or be very dramatic when experiencing new things, and presents herself in a very feminine manner.

However, Nico is shown to be rather perceptive in the series, much to her companions' surprise.

Since she came from a wealthy family, it is implied that she has polite and lady-like manners.

Nico was romantically attracted to Tenga. These feelings began to develop as far back as episode 5 or even earlier, but were only fully showcased following episode 7. Her feelings for him were not really explained beyond being "weird taste [in guys]," but Nico seems to become very energetic and excitable around Tenga every time they interact, so the source of her feelings can be easily inferred.

When her feelings were exposed to Tenga during the Storm Arc, Nico is understandably humiliated. Even though she knew that Tenga liked Chidori and would most likely fight for her, she still wanted him to choose her over Chidori deep down, but couldn't bring herself to say it out loud even when the kiznaivers were sharing inner thoughts.

Despite appearing to ignore her feelings during the Storm Arc, Tenga is consistently shown throughout the series to care about Nico in his own unique way, possessing protective instincts toward her, as well as a secondary attraction. Tenga and Nico's temperaments are also similar, and they find themselves agreeing on most things. Although the Storm Arc does a poor job of addressing this, it is heavily implied in the episodes following that he thought a lot about not only his and Chidori's romantic feelings, but Nico's as well. Even so, the fact that Nico expressed in the finale that she "hadn't given up on Tenga" and still has plans to pursue him. Tenga suggested that he never explicitly rejected her, thus leaving his feelings for her open-ended according to his own logic.

Even so, when Nico sees Tenga and Chidori talking at the mall in the finale while waiting for her, Hisomu, and the others to show up, Nico sees how well the two of them are getting along and decides to let them have the moment alone, rationalizing this by stating that at the very least, she doesn't want things to remain awkward between the two of them. She still expressed feelings of jealousy at first, however, and reaffirmed her feelings for Tenga in the form of planning a playful "fistfight vs. Chidori on the beach" for Tenga's love, and to bring everyone even closer together.

Among the rest of the kiznaivers, Nico disapproved of Noriko's actions and Noriko is indifferent towards Nico. Nico made it clear to the kiznaivers that she honestly didn't care for Noriko, no matter how tragic her past is. At the end of the last episode, Nico tries her best to be friendly toward Noriko and invites her to take pictures with all of them, as Nico generally wants to be nice and sociable with people.

Community content is available under CC-BY-SA unless otherwise noted.
Advertisement